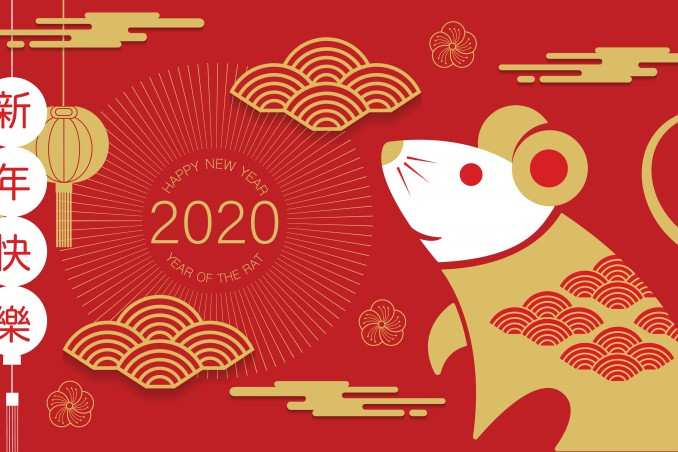 For Chinese people all over the world, we have entered the Year of the Rat (Shǔ). Between the end of January and the beginning of February, in fact, in China – and more generally in South-East Asia and wherever there are large Chinese communities – New Year is celebrated, also known as “Spring Festival” (Chūnjié). The date of this traditional celebration is not fixed and is calculated according to the lunar calendar, used in the country until 1912 and still used today to mark the festivities.

2019 was the year of the Pig, this will be the year of the Rat. In accordance with the Chinese zodiac, each year is identified by an animal sign and a branch of the earth that make up a cycle of twelve elements. The Chinese New Year determines the passage from one to the other and each animal has precise characteristics. The mouse, which is the first sign of the Chinese zodiac, represents prosperity. Precisely for this reason it is considered a source of wealth, wisdom and good omen. This animal is also appreciated for being a great observer, smart and able to adapt everywhere.

According to an ancient legend, the Jade Emperor (Yù Huáng), the ruler of the paradise of Chinese mythology and one of the major gods of the pantheon of the Taoist religion, organized an animal race for his birthday, so as to determine, following the results, the order of the zodiac signs. The myth tells that the Rat, using his cleverness, managed to get a pass on the back of the ox, landing first at the finishing line.

Another legend tells that Siddhārtha Gautama (Buddha) gathered all the animals of the earth, but only twelve went to offer their greetings. So, as a reward for their loyalty, he decided to call each year of the lunar cycle with the name of each of the animals that came. Again, the Rat, thanks to its intelligence and speed, arrived first.

The signs of the Chinese zodiac follow one another in a precise order, established by the principle of alternation of Yin and Yang. The concept of Yin and Yang is very ancient and is the basis of Chinese philosophy and thought, according to which every element that makes up the Universe has two opposing and complementary entities, such as day and night, thus able to form, together, the totality.

This vision, present in the spiritual philosophy of Taoism, which has become a religion today, is based on the teachings of Laozi, better known in the West as Lao Tzu and to whom is attributed the drafting of “Tao Te Ching”, the sacred text that contains its precepts.

The Yin or Yang of animals would be defined by the number of claws present in the paws or hooves. Usually the animals have the same number both in the front and in the backs. The rat is an exception to this rule: on the four front legs, in fact, it has four toes, while it has five on the hind ones. Precisely for this reason it would represent the union of Yin and Yang and would thus be the first sign of the Chinese zodiac. Other theories, instead, consider it only a Yang animal.

All the animals of the Chinese zodiac

As we said before, each animal has its own characteristics. The ox is considered a great and tireless worker, calm and taciturn. The tiger, although very charming, would be an aggressive and authoritarian animal. Whereas the rabbit would have a selfless and generous personality. The dragon, the only mythological symbol compared to the others, would be strong and narcissistic. The snake is considered beautiful and elegant. The overwhelming and stubborn horse, the creative goat, and the dynamic monkey. The impulsive cock. And finally, the dog, a faithful and protective animal.